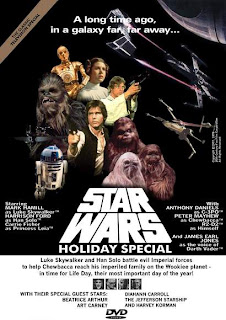 scene/ Wastelands Fanzine
Issue 17
December 2008
I was first alerted to the existence of this bizarre footnote in the Star Wars cannon was back in 1984 when I was in grade three at primary school.
Brett, a school mate, came to school and said he had seen this TV show that had all the Star Wars characters in it and featured Chewbacca’s family especially Chewbacca son watching TV.
Poor old Brett was quickly denounced as a liar by the grade three ‘Star Wars Mafia’, (who apparently knew all there was to know about Star Wars). Subsequently, all the cool kids shunned him. However being Brett’s friend I gave him the benefit of the doubt and believed him. I remember talking with him, picking his brain for every tiny detail and wish like hell that I had seen it.
For years I searched the local TV guild hoping that one day this elusive show would be re aired, alas to no avail. I didn’t even know the title of this thing. AsI got older and the Star Wars craze had died down to a whimper, I had pretty much given up on ever seeing it and I even started to wonder if good old Brett had been bull shitting. 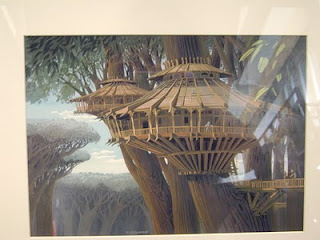 Jump forward to 1996 and the invention of the inter web, well maybe not but it was when I discovered it anyway. I remember late one night at uni surfing through endless pages of porn getting bored and struggling to think of something to search for when like a bolt I typed in the words STAR WARS T.V. SHOWS. Up popped three site matches found, two were old star wars Kenner toy adverts and the third stated STAR WARS HOLIDAY SPECIAL.
That was it, I had finally ended a 13 year quest and had the first un-deniable prove that this fucken thing actually existed. What was to follow was a feverish adventure to track down a copy, and that’s another story but you’ll be pleased to know that I did find a copy (be it in very poor quality).
So here it is, for those of you who have never heard of the Star wars Holiday special I have put together is special obscene hangover hall o fame.

The Star Wars TV special was made by CBS in 1978 and aired around Christmas of that year. Apart from one repeat showing on a French TV station the year after and some time in 1984 in Australia it was never shown again and now exists only on bootleg video tapes furtively sold at Sci-Fi conventions.
The basis of the Holiday Special is a two hour long drama set on the Wookie home-world on which Chewbacca’s wife Malla, son Lumpy and father Itchy await the return of Chewie in time for Light Day- a sort of Wookie Christmas.
This basic plo

t is used to hold together a motley revue of star tunes and musical numbers by performers who one suspects were already past it in 1978. However the real novelty of the Holiday Special -and also its most disturbing facet- is the appearance of the original Star Wars cast in their original roles. These include Mark Hamill, Harrison Ford, Carrie Fisher, Peter Mayhew inside the Chewie suit and Anthony Daniels inside C3PO. The only ones unaccounted for are Alec Guinness and James Earl Jones. Kenny Baker seems to have been spared another stint inside R2D2 by having the role played by a real robot.

I don’t know what combination of money and contractual obligation led to much of the original cast turning up for this outing but their total combined screen time can’t have added up to more than ten minutes, maximum. In fact, much of the show involves long scenes shot in Chewie’s tree house involving Malla, Itchy and Lumpy howling at each other in fluent Wookie. The basic sequence of events is as follows:

The Wookies are getting worried. Chewie is running late due to his unwise decision to hitch a ride home with Han. Some space battles with tie fighters from the original film are shoehorned into the action. The bridge of the Millennium Falcon looks like it is made up of old boxes and a couple of coloured lights. Harrison Ford intones his lines like an embarrassed sleepwalker.
Malla calls Luke on the videophone. Luke and R2 are fixing up an X-wing made of egg cartons and plastic tubing. Luke doesn’t kn 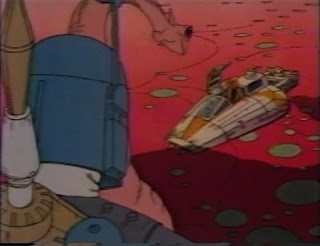 ow where Chewie is. Something is up with Mark Hamill’s face. It may be the new haircut or the layers of makeup following his post Star Wars car accident but he looks disturbingly like Mia Farrow in Rosemary’s baby. R2 sets fire to the X-wing.

Malla then calls Leia who is hanging out in front of a blue pattern with C3PO. She doesn’t know where Chewie is either. Carrie Fisher does a pretty good job of Leia, it must be said, but her face is puffy and her eyes are pointing in different directions. I have it on good authority that she was hitting the old space dust pretty heavily at this point in her career.

Lumpy activates his entertainment console to cheer himself up and a troupe of fluorescent clowns, jugglers and acrobats are holographically created for his, and I assume our, amusement. They do back flips for what feels like fifteen minutes, egged on by a life size clown blowing a horn.

The Holiday Special takes a turn for the worse at the appearance of Sondant. A human trinket merchant and friend of the Wookies, he is played by Art Carney, a character actor who clearly has never seen Star Wars but might have had it described to him by a young relative. With a great deal of unwelcome pantomime mugging and ‘funny’ mannerisms, he had me reaching for the fast forward button with every one of his frequent appearances.

‘Things Wookies do for fun while waiting for the plot to start moving’ is used pretty much for the next hour, and throws up such treats as:


However it did prompt the question: why are the exploits of the main Star Wars characters being made into cartoons for Wookie TV? Are Luke, Han, Leia and Chewie already celebrities? And if so, can Wookies buy action figures of them? It hurts the brain.

Finally the story lurches to an end. Han and Chewie sneak into the tree house, kill a Stormtrooper and are happily reunited with Chewie’s family. Chewie gets to spend Life Day with the other Wookies which is shot like an early Queen video that is if Queen were seven foot tall, wore purple robes and had facial hair problems. 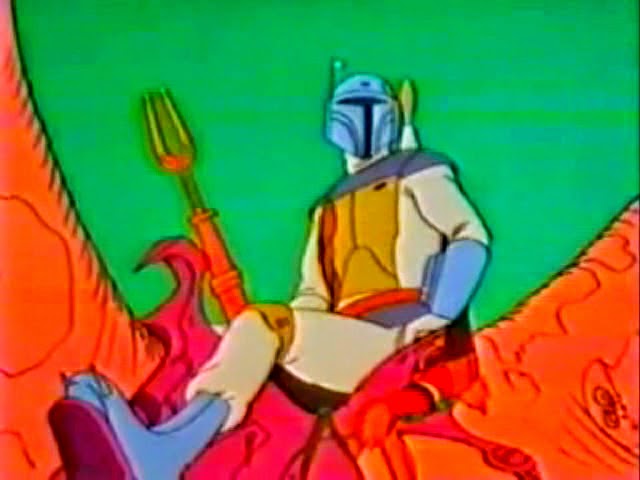 Then Luke, Leia, Han and the droids join the Wookies in a celebration of Christm- sorry- Life Day. Just when it couldn’t get more tacky, Leia sings a song of goodwill and love which has been tortuously set to the melody of the Star Wars theme.

There is good entertainment, and then there is bad entertainment. Then there is the so-bad-that-it’s-good zone, but the Star Wars Holiday Special occupies a hitherto undiscovered region on the spectrum. It is so bad that it saps one’s will to live. It is a malignant hydra with the faces of those we know and love and a body of pure evil. Sections of the original film intercut with this lowband video mess serve only to remind you how far removed this TV ‘special’ is from the film in quality and budget. 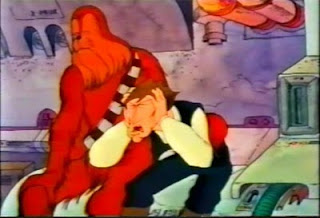 George Lucas has said he would like to see every copy of this show burned, but I think the original films would be better served if everyone could see this frightening example of what happens when the right characters fall into the wrong hands.
However as with all hangover hall o fame entries, this film is vastly more whatchable when feeling less than ordinary a some may suggest that it is a bloodly masterpiece when viewed totally pissed.

Oh and one last thing, to the entire grade three Star Wars Mafia, Brett was right, so you know where you can shove that lightsaber!!!