This year marks the 8 year anniversary since the passing of Tom "Pig Champion" Roberts, the corpulent and charismatic guitarist for hard-core heavyweights Poison Idea, and the monumental announcement that the reformed Band will be touring Australia for the first time in May. Poison Idea, Jerry A, Pig Champion and co contribution to hard-core cannot be underestimated. They helped to create and sustain the genre so that it remains today for future generations. So I thought I would put this article together pinched from various sources and my own brain to fill in a bit of a PI history of sorts.

Poison Idea was started in 1980 in Portland, Oregon, by vocalist Jerry A. (Lang). Within a year, the band had a solid line up with drummer Dean Johnson, guitarist Tom Roberts (aka Pig Champion from the band Imperialist Pigs), and bassist Glen Estes. Influenced by Germs and Black Flag, they took their musical cues from bands such as Discharge and SOA. Pushing the speed limits of contemporary punk rock, they played raw and angry hard-core the likes of which had rarely been heard before (or since). 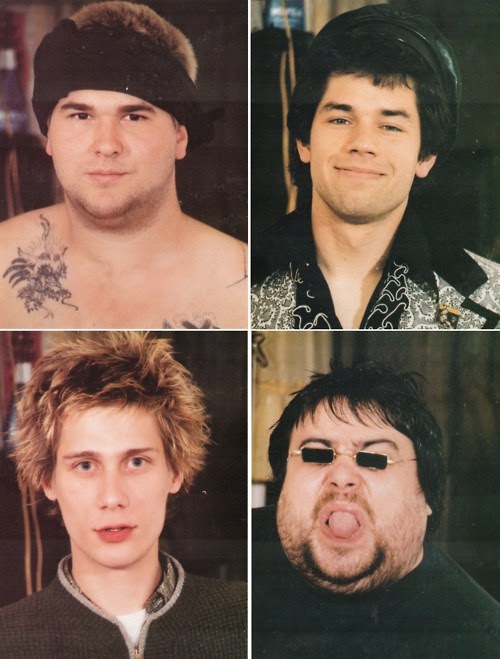 Their 1983 debut EP, Pick Your King, was released. Its subsequent follow-up, Record Collectors are Pretentious Assholes (featuring Pig Champion's substantial collection on the cover), saw Chris "Tense" replacing Glen on bass. Both were put out on a small label from Eugene, Oregon called Fatal Erection.

In 1986, Poison Idea released the aptly titled Kings of Punk LP. By this time, the band's sound had changed from manic, breakneck thrash, to a more driving, Motörhead -influenced attack - losing none of their intensity, anger, or nihilism.

In the next few years, Poison Idea's line up (mainly the rhythm section) changed several times. By 1989, Poison Idea pulled it together; after trouble with record companies and distributors, they started their own label, American Leather (named after a Germs track), and began by reissuing their 1982 demo.

The band found their most stable line up in years: Jerry A., Pig Champion, Myrtle Tickner, and Thee Slayer Hippie and then added lead guitarist Eric "Vegetable" Olson, who wrote many PI tunes during his tenure in the band. The band then released War All the Time (named for the Charles Bukowski book) in 1987. War All the Time and the EPs that followed (the Getting the Fear 12" and the Filthkick 7") found them further developing the rock/hardcore sound first established on Kings of Punk, which they would hone in 1990 with Feel the Darkness. The classic Feel the Darkness successfully combining (where so, so many others had failed) the best elements of hard-core and hard rock for a dark, powerful sound. By this time, their drinking habits and hard living were beginning to catch up with them: the band weighed in at about 1,300 lb. collectively, and Pig Champion in particular was very fat, often having to play sitting down.

Poison Idea was one of those bands of unsung heroes that went virtually unnoticed while more successful bands took elements of their style and broke through to mainstream audiences. Poison Idea has been cited as an influence by bands and musicians such as Nirvana, Zeke, Turbonegro, Eyehategod, Pantera, Napalm Death, Machine Head, Emperor’s Bård Faust, Generation Graveyard and Ratos de Porão, but the closest that Poison Idea's music has come to respectable exposure was when Pantera covered "The Badge" for the soundtrack to "The Crow" in 1994.

Most people, who bought that soundtrack all those years ago, thought the song was great, but never did any research into where it came from. 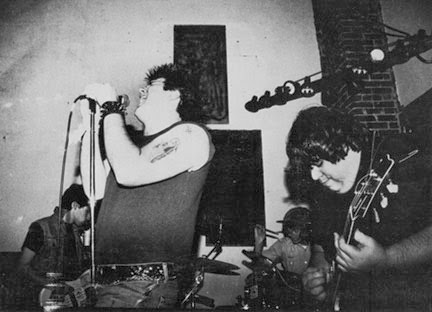 I was at a party when I first heard the track, I remember how spun out I was when I heard the badge on the stereo. It sounded good but not quite right, I said something to someone like- “Hey that’s a Poison Idea song, who‘s playing it”. And after the obligatory who the fuck is Poison idea I got – “its Pantera man”. I had discovered Feel the Darkness a few years earlier in the "Punk" section of my local record store and it still spins regularly

Punknews.org sums up why you should own this record perfectly:

With this album, Poison Idea have mixed in the perfect amounts of thrash metal, punk, hard-core and Motörhead-style rock and roll, and the result is a terrific hard-core masterpiece that balances circle pit volatility with catchy rock and roll grooves and seriousness with sarcasm, resulting in an often copied, rarely duplicated hybrid sound that is purely their own. Feel the Darkness is an album that you will come back to after listening to boring and unoriginal albums, and an album that you will use as a comparison standard for other releases of the same genre. 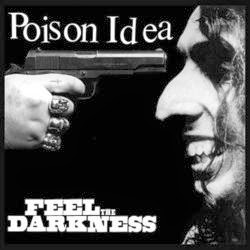 "Plastic Bomb," the album's opening track, starts off with a brief, sinister-sounding piano intro before the guitar, drums and bass come crashing in all at once like a coordinated military strike. The track only picks up speed from there, as thundering drums and a fast, thrash riff provide the cover for Jerry A's grunted vocals and a catchy Bad Religion-like chorus of "whoa-oh-ohs." This is one of the catchiest songs on the album, and you'll be humming it long after you've turned the record off.
The improperly named "Deep Sleep" kicks in next, for it's nearly impossible to sleep through the maelstrom of shredding guitars and an impressive virtuoso solo courtesy of Pig Champion, the fattest guitarist to ever play punk rock.
The third song, "The Badge," is considered by many to be a quintessential Poison Idea song. Hundreds of punk bands have written songs about how much they hate the police, but Poison Idea's vicious, derisive tirade against officers of the law draws deeply from their own uniquely intelligent well of potent, sarcastic cynicism and is arranged perfectly on top of an equally vicious riff. It's not surprising that Pantera chose this song to cover.
The fourth track, "Just to Get Away," is pure, unadulterated rock and roll, the irreverent, scurrilous kind that parents were once threatened by, the kind that Lemmy and Iggy Pop would approve of. A true anthem of unapologetic hedonism, this song has it all -- quitting your job and telling your boss to shove it, hopping into a fast car with your girlfriend and speeding off to a brighter horizon with your middle finger in the air. Even the uber-serious punk rock types who think it sounds corny will be tapping their toes, playing air drums and nodding their head along with the music.
I could write a paragraph for every track on this album that I like, but I'm trying to keep this less than ten pages long, so I'll just hit some highlights.
"Gone for Good" is full-on thrash with Jerry's rapid-fire raps on the dangers of environmental destruction in the name of corporate greed, while
"Alan's on Fire" (often covered by Machine Head in concert) blends cryptic lyrics of a more personal nature within a churning hurricane of musical heaviness.
The prescient "Nation of Finks" could have been written yesterday about our current Zeitgeist of fear, suspicion and "surveillance of the fittest." I'll leave the rest for you to enjoy.

When Pig Champion left the band in 1993, and PI effectively called it quits. however just over five years later, Jerry A reformed the band in late 1999 with the lineup featuring Tom "Pig Champion" Roberts (guitar), Matt Brainard (guitar), Chris Carey (bass) and Chris Cuthbert (drums), breaking in the new lineup the band toured the east coast in 2002 including an appearance at CBGB's.

On January 31, 2006 guitarist Tom "Pig Champion" Roberts died aged 47 at his home in Portland of undetermined causes, although he had been suffering from the flu and an untreated kidney infection. The band had recorded the new record and it was ready for release when he died. Pig wanted the record to be called Latest Will and Testament, a name that the rest of the band liked. After Tom’s death Jerry commented that Pig probably knew something that the rest of them didn’t the album was released in May 2006 on Farewell Records. The band did not play a record release show, or any show for over a year as they tried to get used to the idea that their friend was gone.

The band distributed a video announcement in early October, 2013 announcing now new line up and 2014 world tour with new bassist Natalie Lucio and Eric "Vegetable" Olson rejoining the band on guitar after an almost 25 year absence, best known for his work on the War All the Time album. Now they’re coming to Australia, the band led by original front man Jerry A and featuring a number of other members from throughout the band’s past. I thought I’d never get to see the mighty Poison Idea live in concert,. But they will finally grace Australian shores this May with a four date tour. Cities set to cop a show include Adelaide on May 14th at Enigma Bar, Brisbane’s Crowbar on May 15th, the Bald Faced Stag in Sydney on Friday 16th May and the Bendigo Hotel in Collingwood on Saturday 17th May. 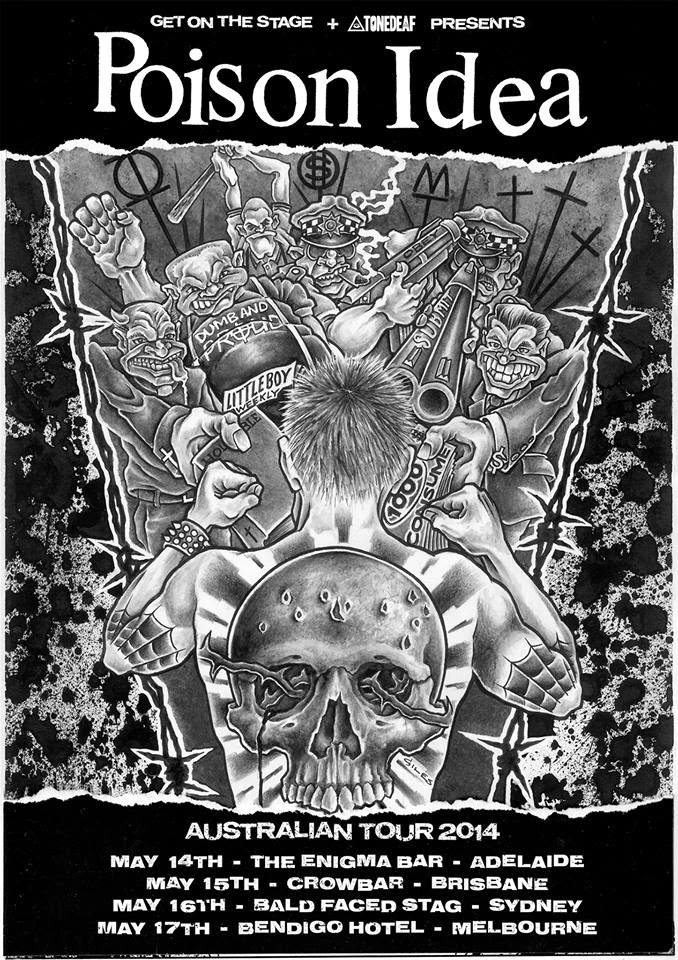 So that’s it, I got my tickets and will be seeing PI in Brisbane at the Crowbar on the 15th of May and then to Melbourne on the 17th to see them play the Bendigo Hotel. If you are interested keep an eye on the Face Face event page


You can get Tickets for Brisbane, Sydney and Melbourne are from here and Adelaide here.

It’s a shame that Poison Idea’s Mating Walruses VHS tends to go under a lot of people’s radar. Released in 1990, this is a damn solid document of their existence from 82-89, arguably their golden years, and shortly before they’d start cracking under the pressures of drug abuse and morbid obesity

What you get here is pretty meat and potatoes Poison Idea. You can catch a glimpse of what it was like when they still ripped up the stage. Some of their best tracks are present, with assorted riot footage and fat guy tomfoolery edited throughout. I don’t know why watching Pig Champion hang out in a diner is so enjoyable, but it is.