The Worlds Most EVIL art Part 1

Write a book or paint a painting, and who knows whether it'll still be around a few years later. But build a goddamned 100-ton bronze statue, and people will still be staring at that shit centuries from now. Which makes it all the more awesome when a sculptor creates a horrifying monument to his own insanity and gets it erected in city park or town square


The Denver International Airport has something no other airport in the world has. Or, for that matter, wants. It's a statue of a horse called El Mesteno, and its demonic gaze is the very first thing greeting you when you step out of the airport building: 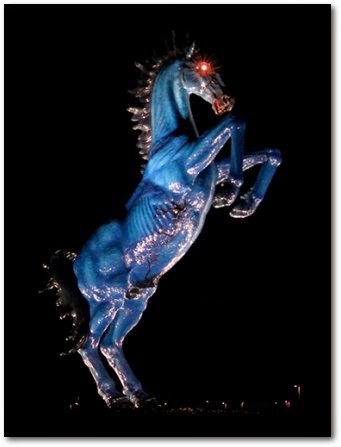 I'm assuming that if you look on the ground behind this fucker, you'll see that Satan has gotten thrown off his steed. The first time you lay eyes upon El Mesteno, you lose all doubt that Lucifer's mighty steed has broken lose of its hell-dimension paddock and is running amock in the world of mere mortals. This is no simple horse statue. El Mesteno has more furious personality in his left front hoof than any iconic statue of George Washington on his noble mount. This mustang looks angry, from his bulging veins and flared nostrils right down to his violent rearing pose. Hey, did I mention that it's 32 feet tall?


El Mesteno, or "oh shit run it's the giant zombie hell horse" as it is more affectionately known, is the gatekeeper between you and Denver, and the price for getting any further is your soul. Which it incidentally took the second it laid those eyes on you, so you now have nothing to bargain with.


I'm thinking the people in charge of erecting El Mesteno probably should've taken the hint that this creepy ass beast was bad news, cause it's kinda  hard to ignore the bad omens that came with El Mesteno's creation. Particulary the fact that a large portion of the heavy statue fell on the artist Jimenez while it was being moved, fatally crushing him. That's right: The zombie horse of DIA killed its own sculptor, making  El Mesteno  both Jimenez's largest and last work of art.

But what does the zombie horse of DIA mean? Is it in fact a symbol of power and strength, warding off any evil that would seek to enter Denver through its major transportation hub? Or is it something darker? Insert conspiracy theories about DIA here, which there are fricken heaps, but I'll get into those in a later post. 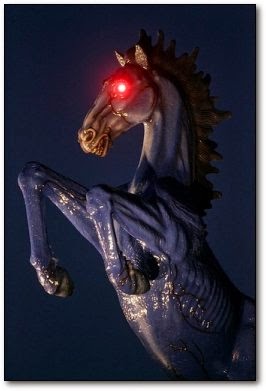 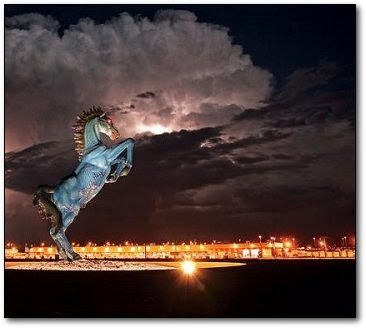