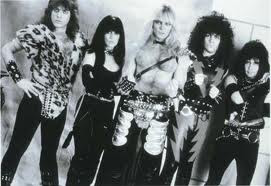 Have you ever come across something so head scathingly bizarre, you just can help wanting more; this is the kinda of experience I relish. I love setting out to find as much info as I can on my new discovery. Uncovering titbits on the internet or at the library, discovering a whole new world that has been hiding away and only known by a select few.

My most recent said experience was the discovery of Jon Mikl Thor, JMT is a bodybuilding champion, actor, songwriter, screenwriter, historian, 80’s big hair cock metal musician and. vocalist. But more on that later. 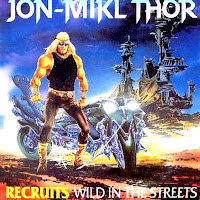 It was purely by accident I stumbled across a record at my local vinyl store Backbeat Records, Recruits (Wild in the streets) is the third album by Canadian heavy metal band Thor. It is also the soundtrack for the 1986 film Recruits. Flipping over the record to look a the back I was instantly sold, big hair, medieval props and a girl band member named Pantera. All for the princely some of $7, Hilarious.

So I grabbed the album and hurriedly went back to my Studio to play it, I wasn’t disappointed it was everything the cover promises soaring guitars, screechy vocals solid bass riffs and more cock than a hen house. That’s when I decided I needed to find out more about this mysterious Canadian heavy metal bodybuilding historian, and what I found out you would never had guessed. 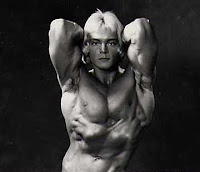 I turns out that JMT was a very successful athlete, As a bodybuilder, he was the first Canadian to win both the Mr. Canada and Mr. USA titles. During his bodybuilding career, he has achieved over 40 titles around the world.

If this wasn’t weird enough As a musician, he is the front man for the heavy metal band Thor, billing himself as "The Legendary Rock Warrior". JMT started touring as front man for the band THOR in 1973. The band was first known as "Mikl Body Rock" and "Thor and the Imps" before deciding on the name THOR. He combined strength feats, props, costumes and showmanship with music such as bending solid steel bars in his teeth and having solid concrete blocks smashed off his chest with a sledgehammer. THOR toured Canada and the USA throughout the 1970s and 1980s.

If the idea of a bodybuilding metal lord Still isn’t enough for you,  In 1986 Jon Mikl Thor retired from live performances and started to write and produce films. His career in acting amounting to starring roles in such films as Zombie Nightmare, and Rock 'n' Roll Nightmare..

So what was my next move you ask?, Well dear reader it isn’t obvious, my sole mission of the next day and a half was to track down JMT 80’s video nasties. So after some more net research believe it or not I found them (thank you eBay and Amazon) and three weeks later I had in my hot hands copies of Zombie Nightmare, Rock n Roll Night Mare and the 2005 RnR Nightmare squeal Intercessor: Another Rock 'N' Roll Nightmare.

So what were the flicks like? Well let’s start with Zombie Nightmare, after a promising opening credit sequence, featuring the strains of Motorhead's "Ace of Spades", it seems the film can do no wrong. The overall result is a film that's never as good as it wants to be and ends up falling extremely short of it's early promise.

Our favourite steel-bending rock god thespian, Jon Mikl Thor, plays a dork in a hooded sweatshirt who becomes victim to a hit-and-run by Tia Carrere and Co. His mother calls upon the neighbourhood voodoo priestess, played by Manuska Rigaud (think Karen Black and Tina Turner's lovechild on PCP), to resurrect her dead son, so he can wreak revenge on the tire-squealing Punks. One by one, the no-good teenagers meet their end by the hands of the zombified dork in the hooded sweatshirt.


Halfway into the film, Adam West makes a welcome appearance, playing the local police chief who may have something to do with the intricate proceedings.
For those who may ponder Adam West's involvement in such a film, allow me to put it into perspective, how many actors can say they've worked with The Three Stooges AND Jon Mikl Thor? I rest my case.

Thor went on to star in a whole another nightmare, "ROCK 'N' ROLL NIGHTMARE" In Rock n Roll Nightmare an 80's metal band go to an old house to record an album. It's possessed, and demons start killing people. In between death scenes the band rocks out. Thor himself wrote and produced the film and soundtrack. That's really all you need to know, because nothing else in the movie makes a lick of sense. The direction, acting, special effects, and script???, are absolute pieces of trash.

That's what allows Thor's stage presence to really shine. It's really just a long music-video that has a horror story thrown in. The music is classic, if you like that style, and if you don't you shouldn't be watching it in the first place.. If you love comic books, glam metal, and mythology and your movies with more cheese than a triple cheese hamburger pizza this is the crown-jewel of entertainment. An absurd good time!! 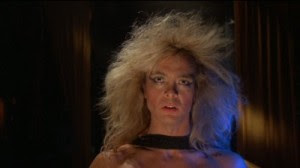 So what about the last one you mentioned? Well let me tell you this, It's BAD. This is hallucinatorily bad. This is so much further down the scale than Rock 'n' Roll Nightmare that you'll laugh hysterically rereading all the one-star Comments on IMDb for the original-poor fools! You think this is bad? Wait till the sequel comes out twenty years later, then you'll REALLY see something that you will bring up your lunch!
﻿ ﻿
﻿
﻿
﻿
However If you believe, really believe, in the healing power of bad film, this is a can't-miss. No hints, no clues as to what you'll be exposed to-OK, just one: the magic scene in which Jon-Mikl, now pushing three hundred pounds, in floppy rubber armour, is attacked in a park by a SINGLE STRAND of Swedish ivy. Does he defeat it with his mighty broadsword? You'll never know till you see The Original Rock Warrior .

So there you have it Brothers and Sisters of Rock and Roll!! Hear my words!! Go forth and find these these masterpieces of trash cinema!! You too can bask in the glory of Jon Mikl Thor the inventor of Muscle-rock. 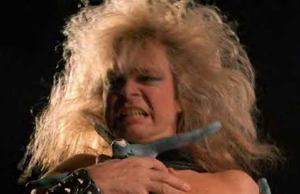 He's been around since the early seventies, He still tours and releases albums. And bands such as Manowar, Iron Maiden, Wasp, even Kiss cannot deny being influenced by him. In short, I think JMT sums it up best  when he plays Jon Triton in Rock n roll Nightmare and I quote:

You've overstepped your line again, Bub. There's a creator's highest law that keeps you in your dark place and yet you and your brethren still insist on coming into this world and trying to steal a place in the world of the living. When will you ever learn? - I think there is a little something in that for all of us really.